Friends Paul and Irma, liveaboards from San Diego joined us in a Florida to bring WORKNOT back to Mexico.  Irma is from Guatemala, fluent in Spanish, great cook and Paul is a proven cruiser.   Provisioning and boat prep continued non stop and we departed for Old Port Cove with plans to leave for the Bahamas and continue south.  Keela seems to approve too. 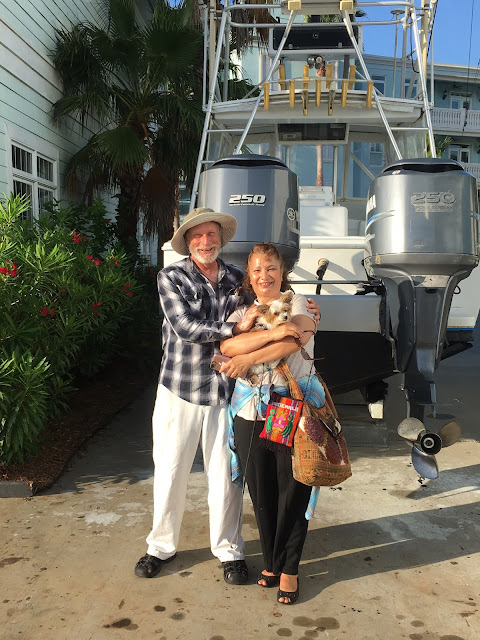 The first year of owning a “new to me” boat is always filled with new problems and new maintenance issues.  About 3 AM ( seems to be the boat God’s favorite time) Paul awoke to a burning smell and no air conditioning in the forward cabin.   A quick inspection suggested the A/C fan had failed.   Daylight revealed a failed shore cord connector.   These are the top source of boat fires and marina fires. 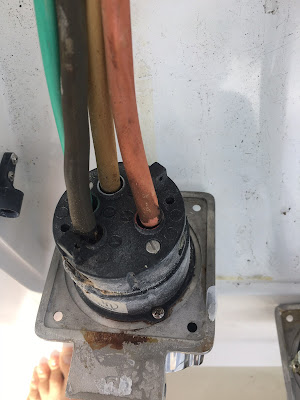 Replacement is pretty straightforward.  The was no damage to the wiring or surrounding area but the connector was toast.  It’s the place where the cord and boat meet, potentially wiggling the contact points every time the boat rocks in the slip.  Add to the inspection list. The other 3 were inspected and found to be OK.   (2 in the bow and two on the stern allowing shore power supply pulled or backed into the slip)

Weather for crossing the Gulf Stream into the Bahamas was windy and cool.  Fortunately we decided to wait another day before leaving Old Port Cove.  Irma had not been feeling well and overnight she worsened.  Next day she went to the ER for a kidney infection.  Not willing to risk traveling to the Bahamas until she had time to fully recover we decided to head north. 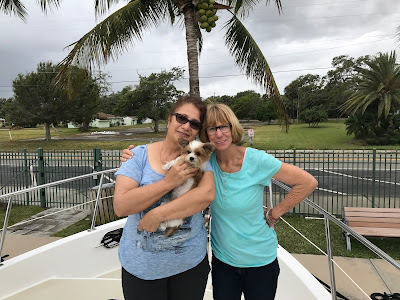 Irma, Mary and Keela ( deciding who is in charge- Note Paul & I not at meeting)

Too many things were stacking against heading to the Panama Canal.  Very new to the boat, fighting belts for the hydraulic stabilizer drive, sick crew, weather and timing for trip in western Caribbean.  With plenty of encouragement from my buddy DENNIS and others we decided to head north, WAY north joining an informal Nordhavn gathering in the Canadian Maritimes starting mid July.