After 2 weeks at Woodley Island Marina, across the estuary from the city of Eureka we are again on the move!  Weather kept up pinned in as from well north of the Columbia River south to San Francisco strong storm fronts with winds gusting to 30 kts pummeled the area.  The fishing fleets were also kept off the grounds and the harbors were full of anxious fishermen and at least a few bored if not anxious cruisers.

Entering and exiting the bars along with Pacific coast adds to the timing of each harbor transit and we waited until noon to leave Eureka.  Not ideal conditions but the bar was not restricted by the Coast Guard during the end of the ebb tide.  Settled ocean conditions and little wind were a blessing but the concerns about a "rough bar" kept me at attention until we cleared into open ocean.  Even with the favorable conditions the seas were running 6' swell with occasional larger waves at the opening.  To add a little excitement waves break on both sides near the jetties during a good day at Humbolt Bay. 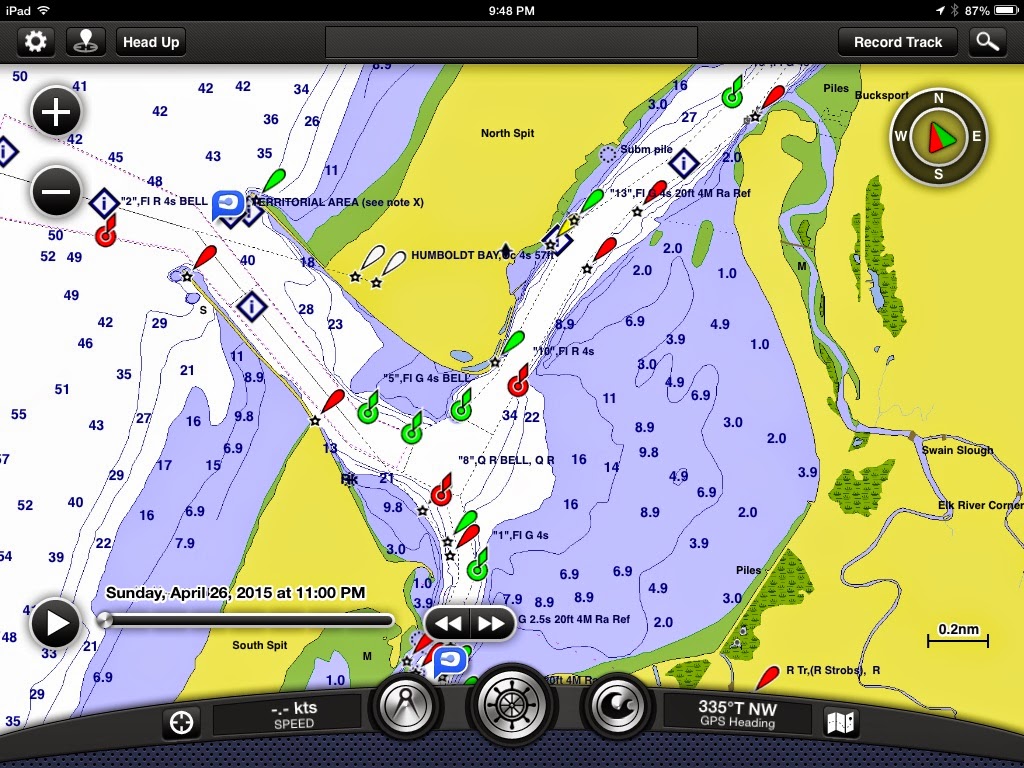 We did not get any good pictures as we left since we were both busy making sure we stayed on course.

As a precaution I ran our wing engine on the way out of the the bay.  This small (40 HP) engine is designed to get us home in case the single main engine fails.  It drives a folding propeller to reduce drag when not in use.  After we left the bar, shut it down and started north as usual.  On my next engine room check saw the wing engine has some odd vibration.  Since it was shut down this was a surprise.  Found the propeller shaft was turning!  Winding (turning in the water stream)  of the non-driven prop is common in twin screw boats and the folding propeller is designed to reduce drag and prevent the prop from winding. 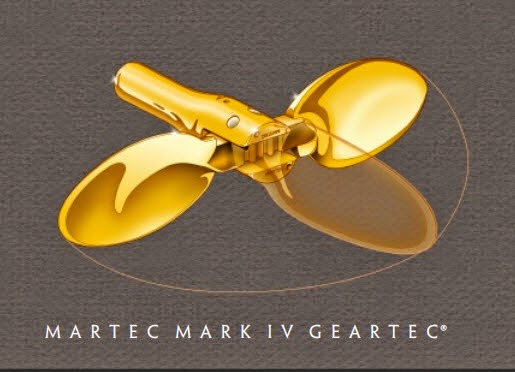 Potential damage to the transmission from rotating the shaft without oil pressure from the engine driven shaft turning as well as damage from the vibration were all good reasons to consider turning around.  Started the wing engine and engaged it in forward and returned to neutral, the shaft continued to turn as before.  Worknot was slowed to minimum speed but still making way.  Shifted the wing engine into reverse and heard a bit of clunk from the shaft.  Now when placed in neutral the prop folded and the shaft stopped turning.  Succes!  My guess is the wing prop had some debris, kelp or other material bound up in the folding mechanism.  After sitting at the dock for two weeks with up to 3 knots of current passing by a lot of "stuff" flotsam and jetsam makes it way under the boat.   Will watch for it to happen again but don't expect problems in the future.

We often see whales and my pictures don't do justice to the majesty or the size of these creatures.  Late in the afternoon we saw at least half a dozen whales all around us.  At one point had to stop and wait for a pair of them to cross in front of us.  The cell phone camera just does not have the zoom capability to get good shots from a moving vessel.  Lousy shot to be sure. 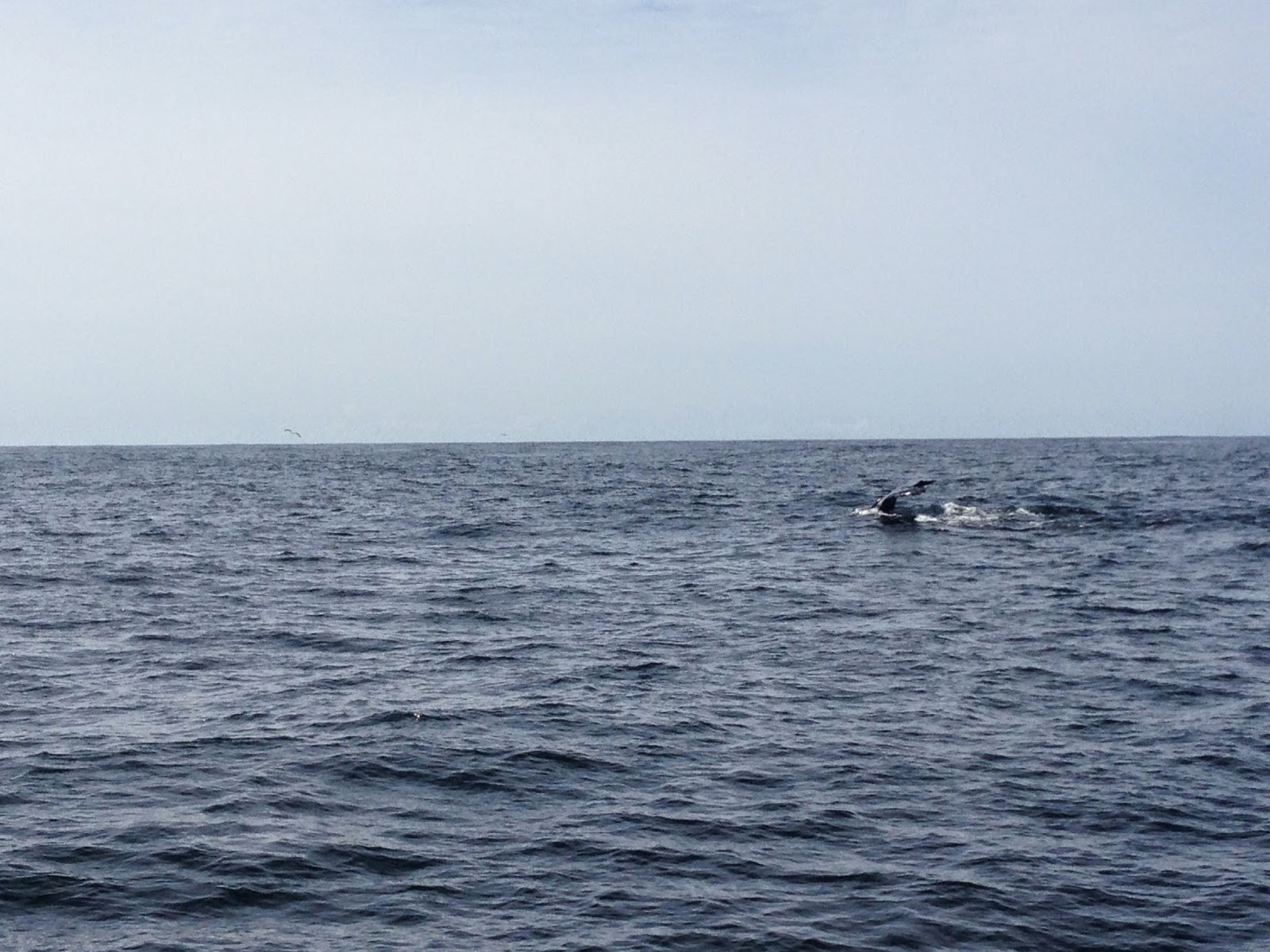 The overnight run was uneventful with Mary and I trading watch as needed.  She is great at the mid-night to 4 AM watch and its my worst time.  I got about 3 solid hours of sleep while Mary was very busy dodging the fishing fleet.  That's WORKNOT in the center of the circle and we are 5-8 miles off shore.  Each ring is a mile seperation.  Every dot is fishing boat except for one, a Nordhavn 47 we are traveling north with on this leg.  John and Linda on Seabird are experienced Alaska veterans with over 30,000 miles of experience all over the world.  We all agreed however this was the most intense fishing fleet encounter for all of us.  I slept through most of the excitement. 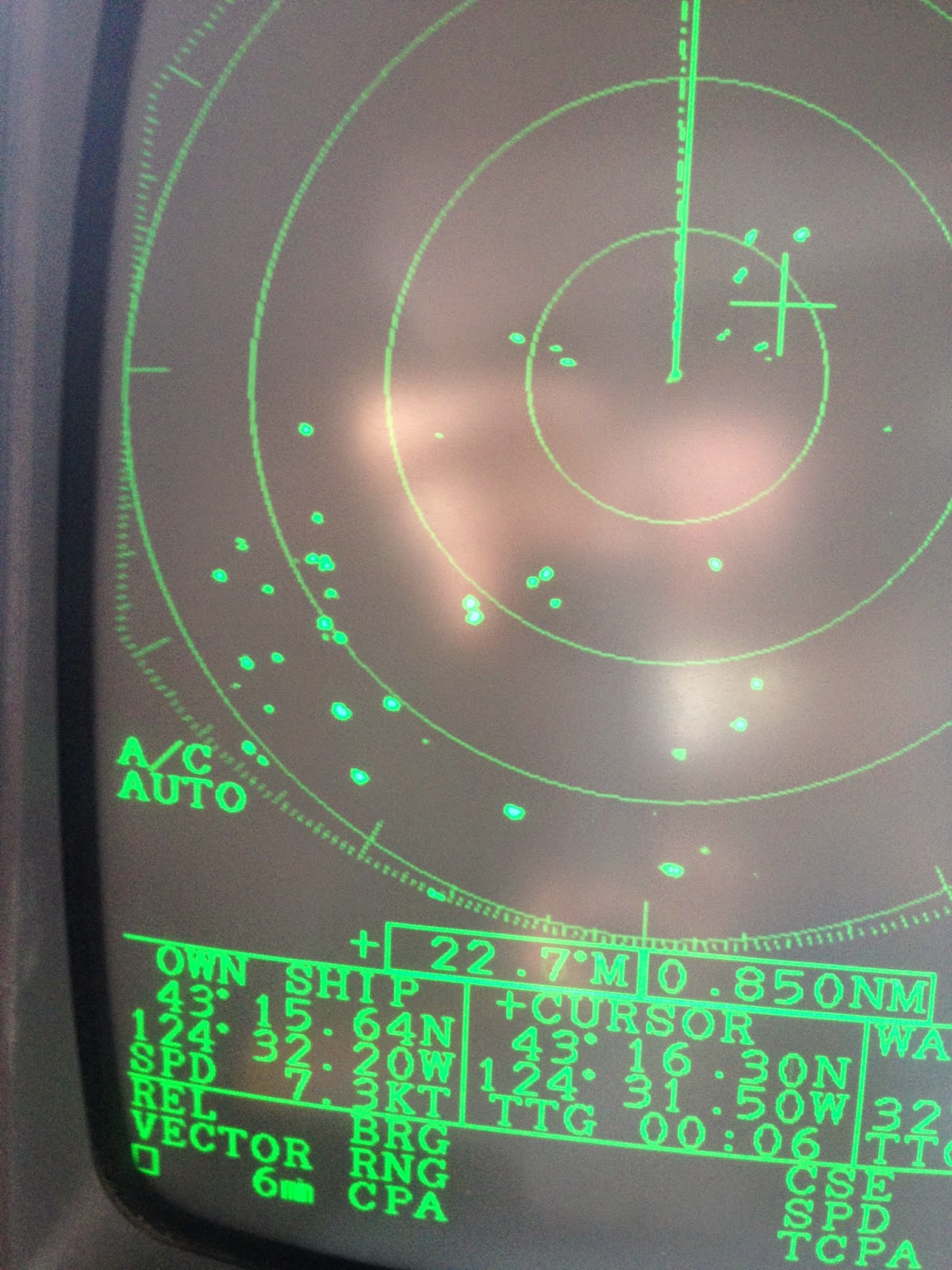 Fishing boat just pulled his nets as we went by outside of Bandon Oregon.    A little larger than average but typical. Our sidetie at the transit dock, Coos Bay Charleston Marina complex.  Another serious fishing community welcoming to cruisers.  Fresh steamed crab, cleaned and cooked on the dock by a local vendor added a nice touch to a long day.  Seabird is behind us. 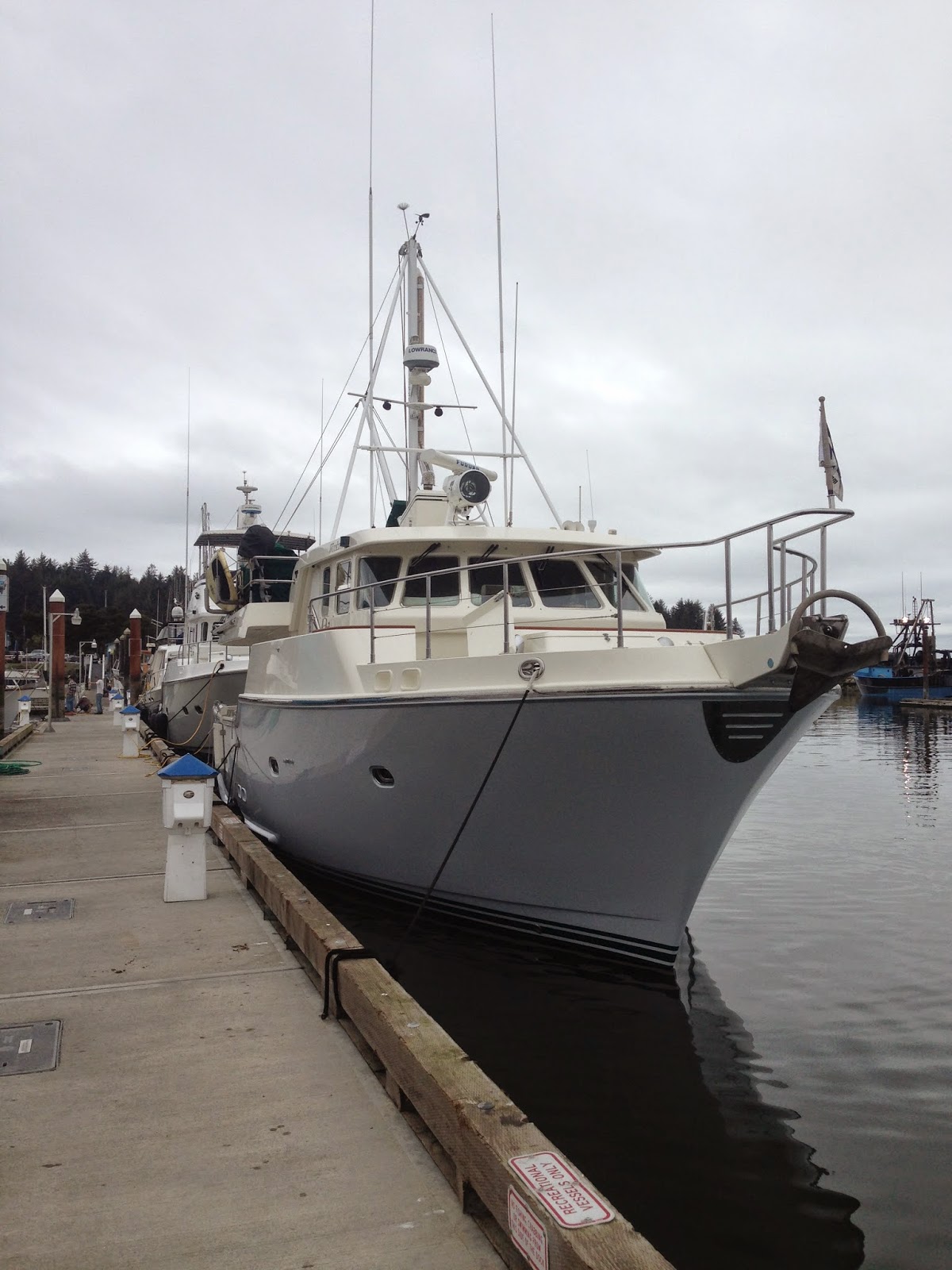 While walking the dock came across the beautiful double-ender.  She's a working fish boat ready for another 50 years of service. 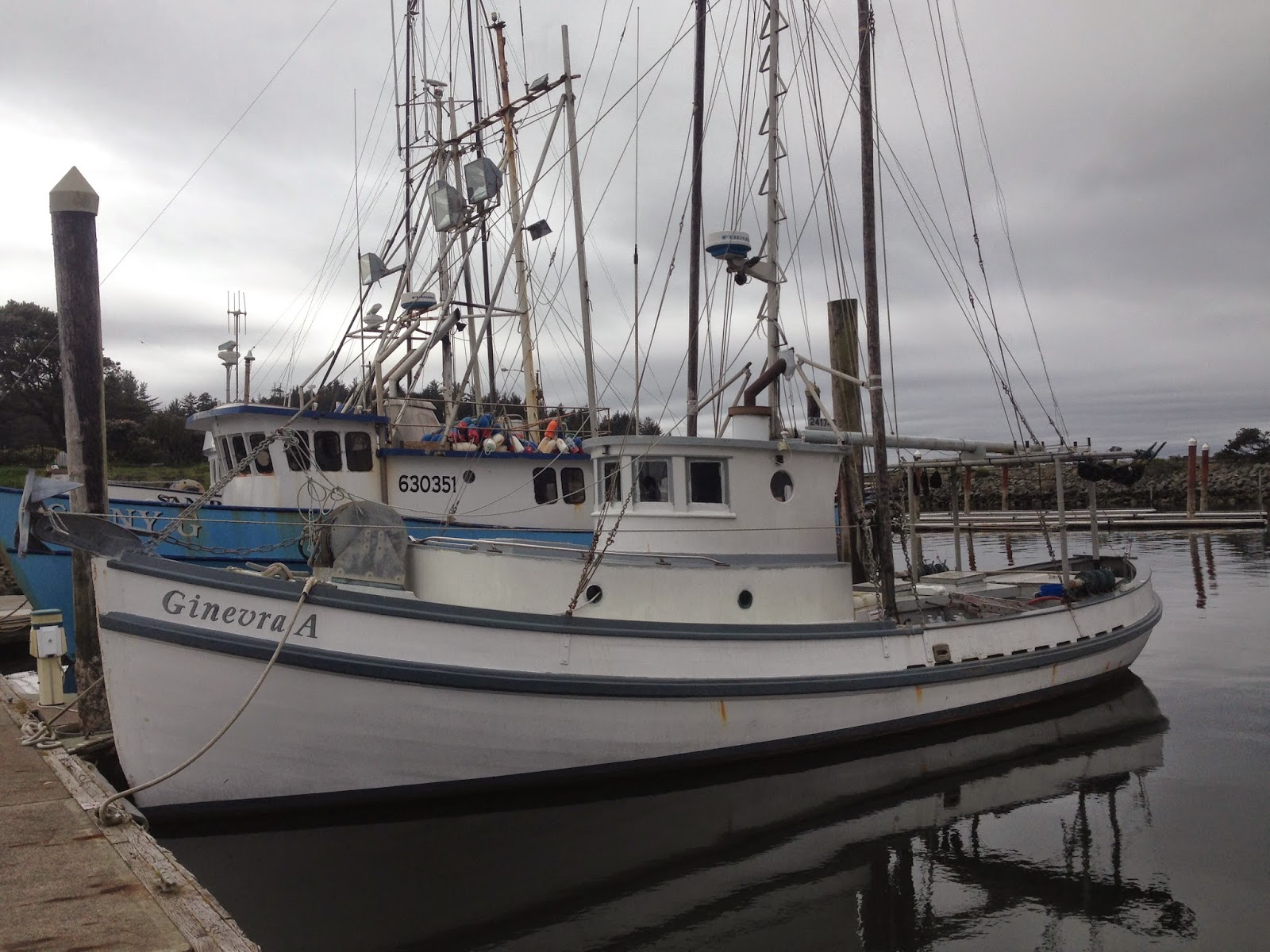 The box score:  Eureka  California to Coos Bay Oregon  181 Miles, 24 Hours dock to dock, 101 gallons fuel, 1.78 miles/gal.
While walking on Woodley Island without Keela saw this cutie chasing a ball.  From a distance looked like Keela but something was off.  This dog weighed about 12# or 3 X Keela.  Even up close an uncanny resemblance. 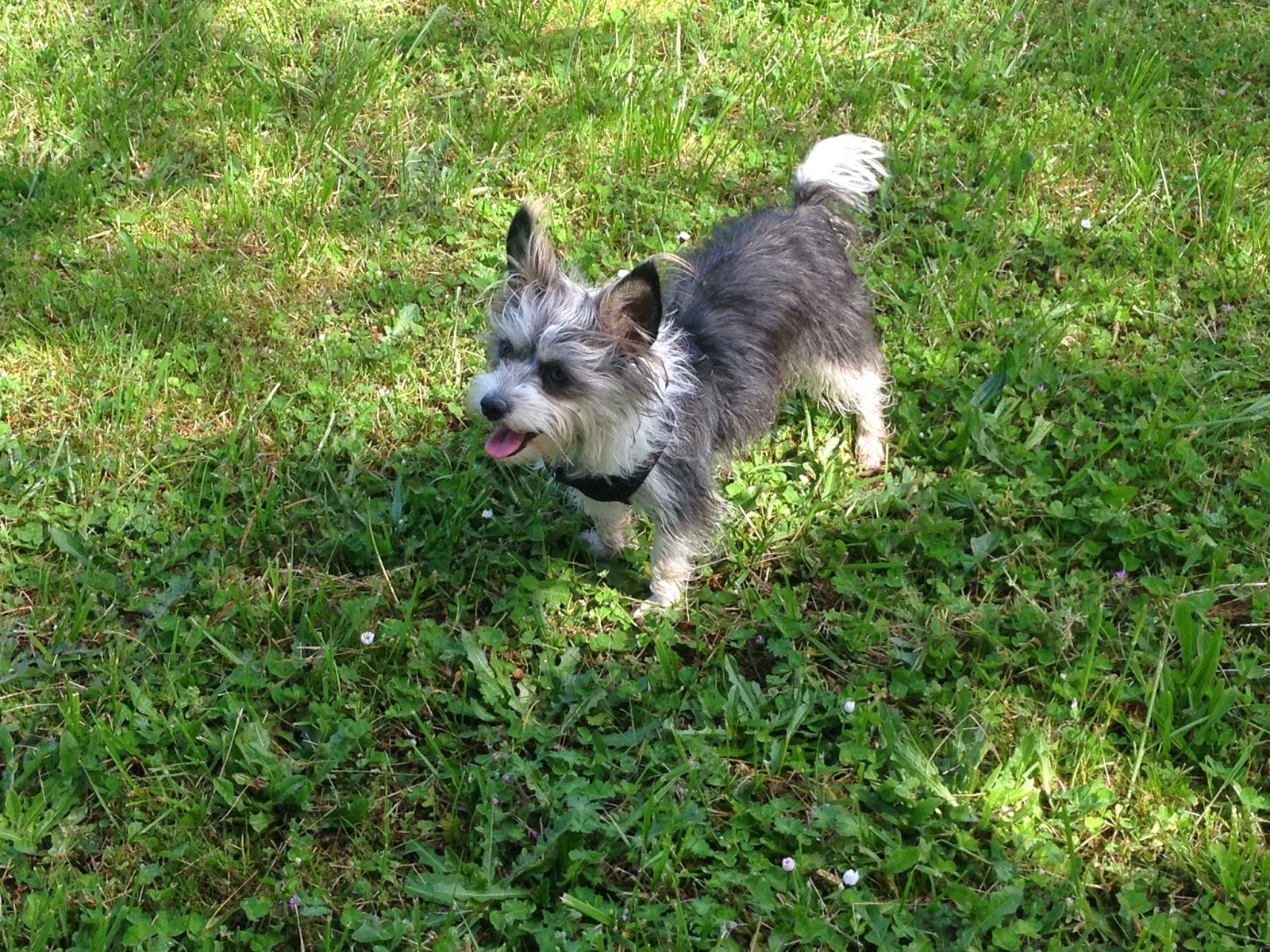 Very comfortable at Marina Village sale dock.  No worries, WORKNOT is not for sale but we managed to get a great end tie from friend Phil Reynolds who is also a broker for Orange Coast Yachts.    Full view of  Jack London Square and further up the estuary.    Managed to get a rental car for about $20/day from a local Alameda rental agency so we had wheels to help us visit with old friends and chase boat parts.  We lived in Alameda on 3 different boats for about 7 years.  Great to get back to "home" but also quickly got back into the daily race.

Captured this moon rise from our bow with a large crane in the foreground. 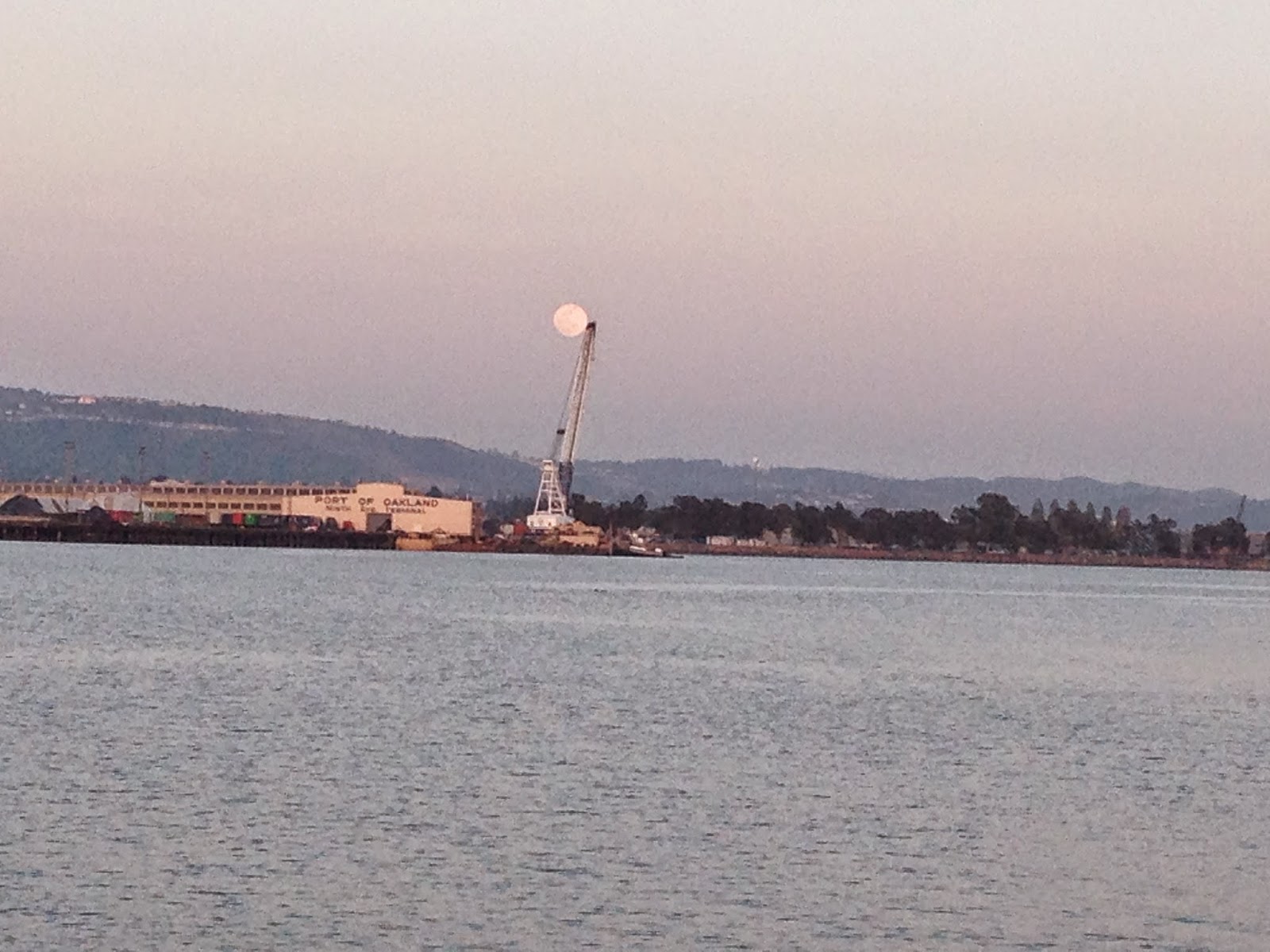 Watched the NCAA tournament with more than a passing interest as I'm a UK Wildcat alumni.  Flew the flag but it didn't pull them over the line.   Great couple of games and UK has little to be ashamed of.  Notre Dame got in their head and they never recovered. Spring is in the air and this family of ducks hung at near us at Marina Village. After arriving in Alameda on 3-23-15 time finally came for us to head north.

Planning to stop at Humbolt Bay we left our slip at about 5AM  on a mild ebb current.  Leaving SF bay in the dark was tense even with the number of years we boated here.  Thanks to AIS we had a good handle on ship traffic and they could identify us.  Got courtesy calls from two different inbound ships to arrange passage and confirm our intent.  5:48AM we cleared the north pillar of the Golden Gate "outbound for sea".

Good weather allowed us to use the Bonita Channel short cut.  Just finished reading an interesting book called "The Widow Wave"-Jay Jacobs.  Its about a real life loss of a small fishing boat and crew in the Bonita Channel focused on the ensuing lawsuit.  Good education of wave formation and the responsibility of being "Captain" no matter the size of the vessel. 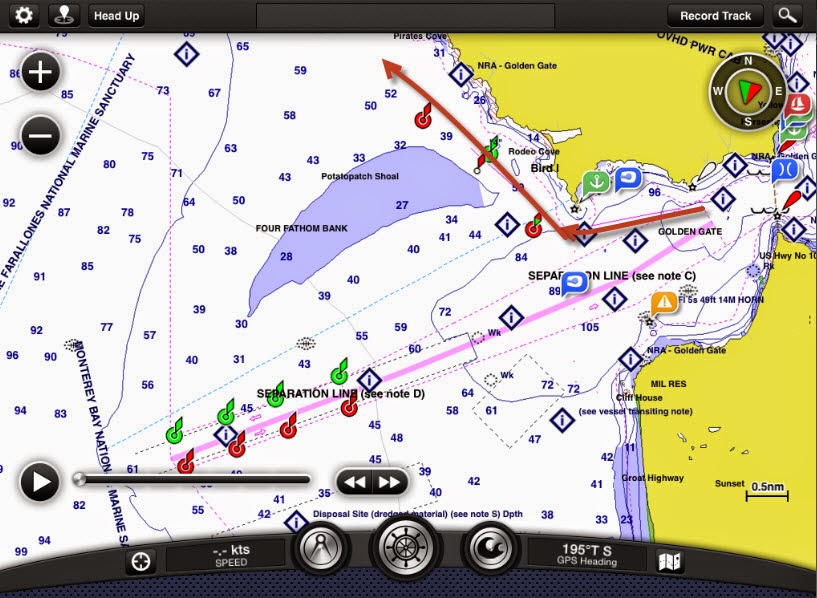 The trip up the coast was great, we have good seas, no fog and moderate winds.  Mary and I traded watches without either of us feeling fatigued or short on sleep.  Cleared the bar a Humbolt Bay just after noon on the following day.  Slack water as we entered and then a slight flood tide.  We were a little early but a check with the USCG station Humbolt Bay gave us a favorable bar report.  No breaking waves at the bar and mild winds.  This one was easy, hope the rest of our crossing go as well.

Slip at Woodley Island Marina about 2 miles into the bay.  Its a fishing town and the harbor reflects its rich heritage.  This statue at the end of the island is huge.  My guess is 30' tall.  The setting is great and next to it is a memorial to fishermen lost over the years.   Many of the names listed have a star next to the name indicating the body was never recovered.   This area is called the lost coast due to the rugged nature of the shore.  Development is spotty at best, harbors are along way apart and lots of reefs and rocks. 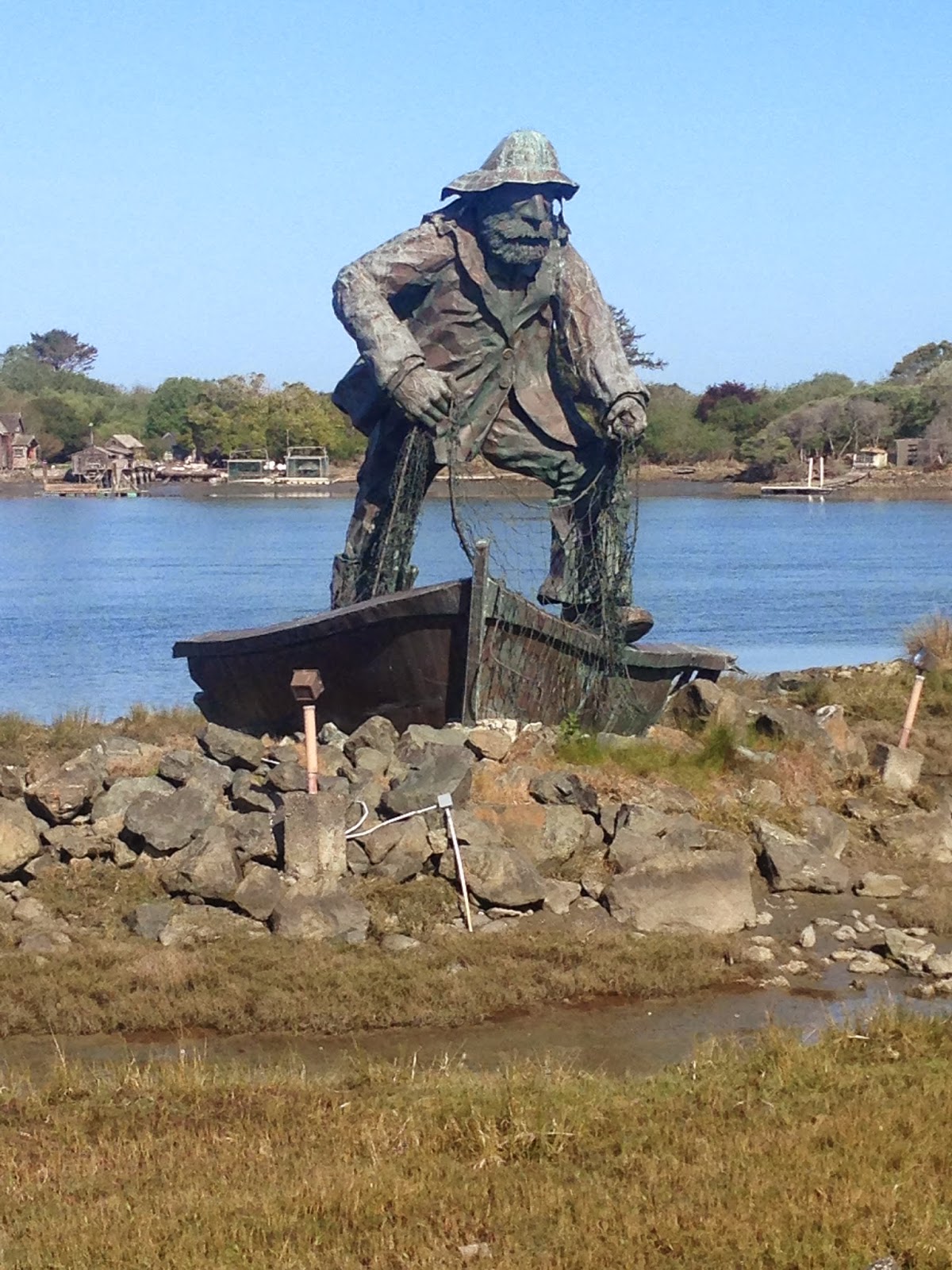 WORKNOT doesn't look too out of place among the real trawlers.   Across from the island Eureka's "Old Town" is accessible by dinghy.  Lots of nice coffee shops, restaurants, book stores and marijuana growing/smoking hardware stores. 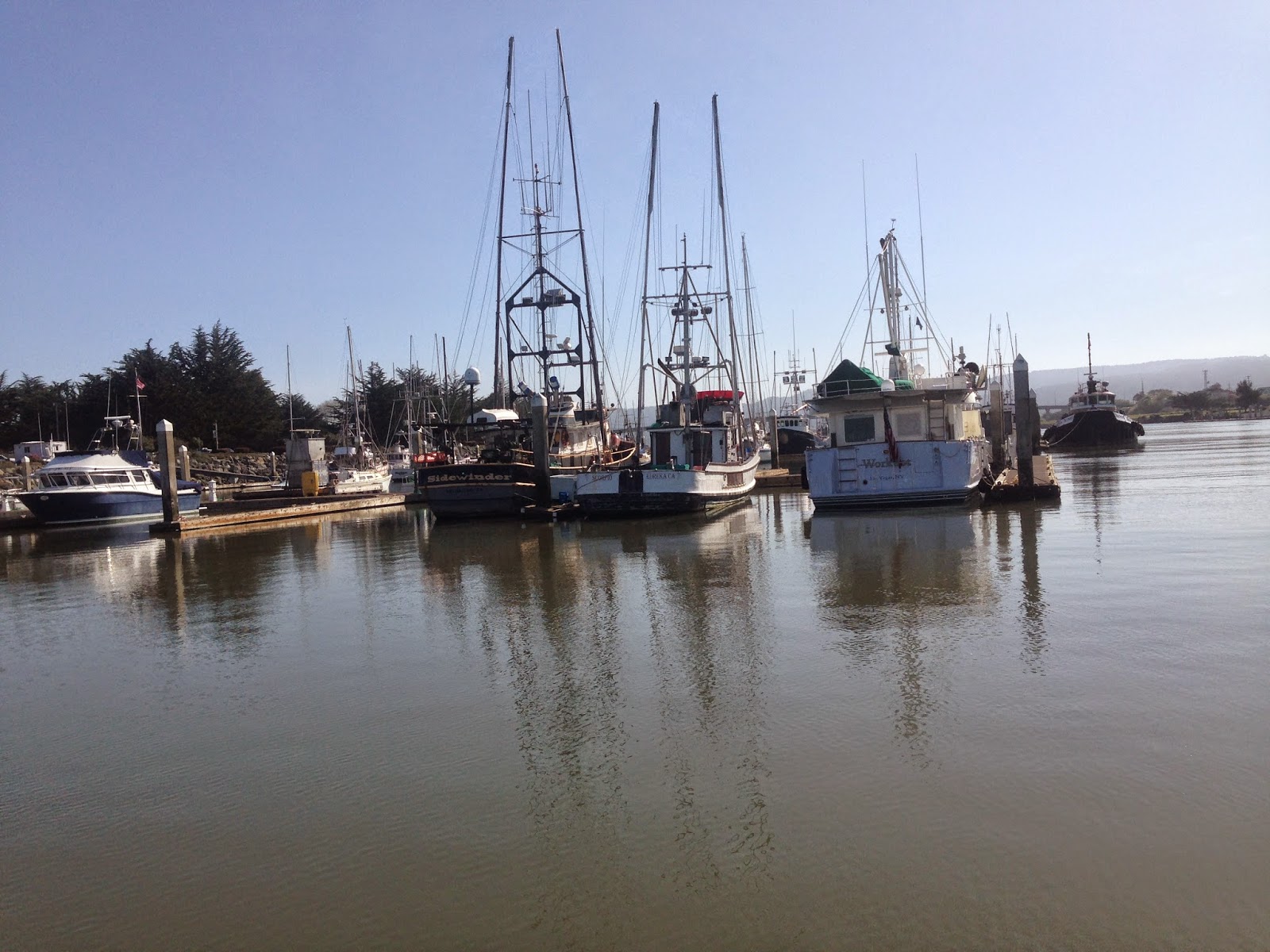 Eureka has done a good job of making the "Old Town" area desirable.  In one coffee shop this was in the tile floor of a restroom.  It really is an "Old Town"......  From the gold rush to world class logging operations this area has been an economic boom and bust area since California was a territory. 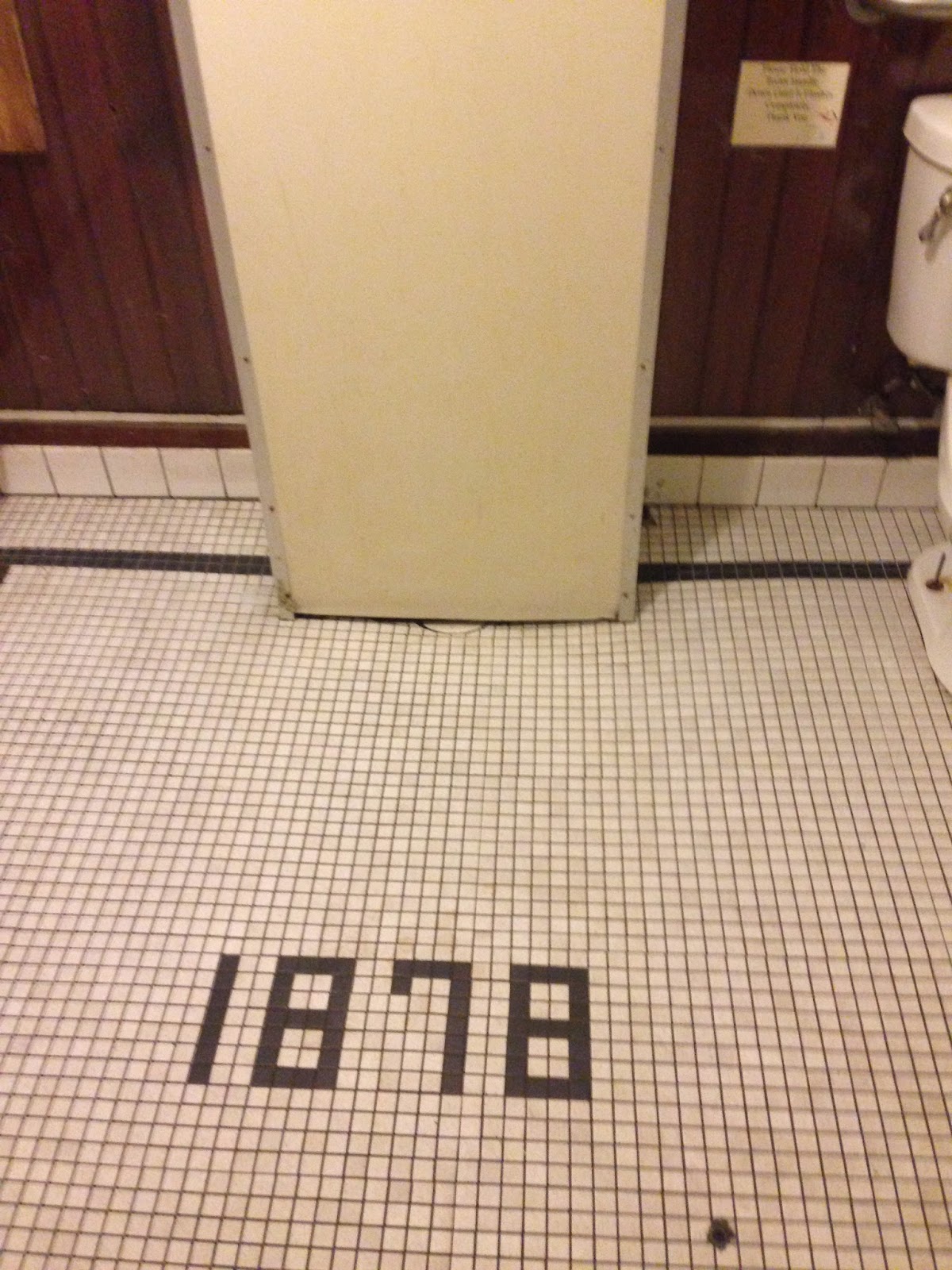 Many restored buildings and even a turn of the century carriage ride available. 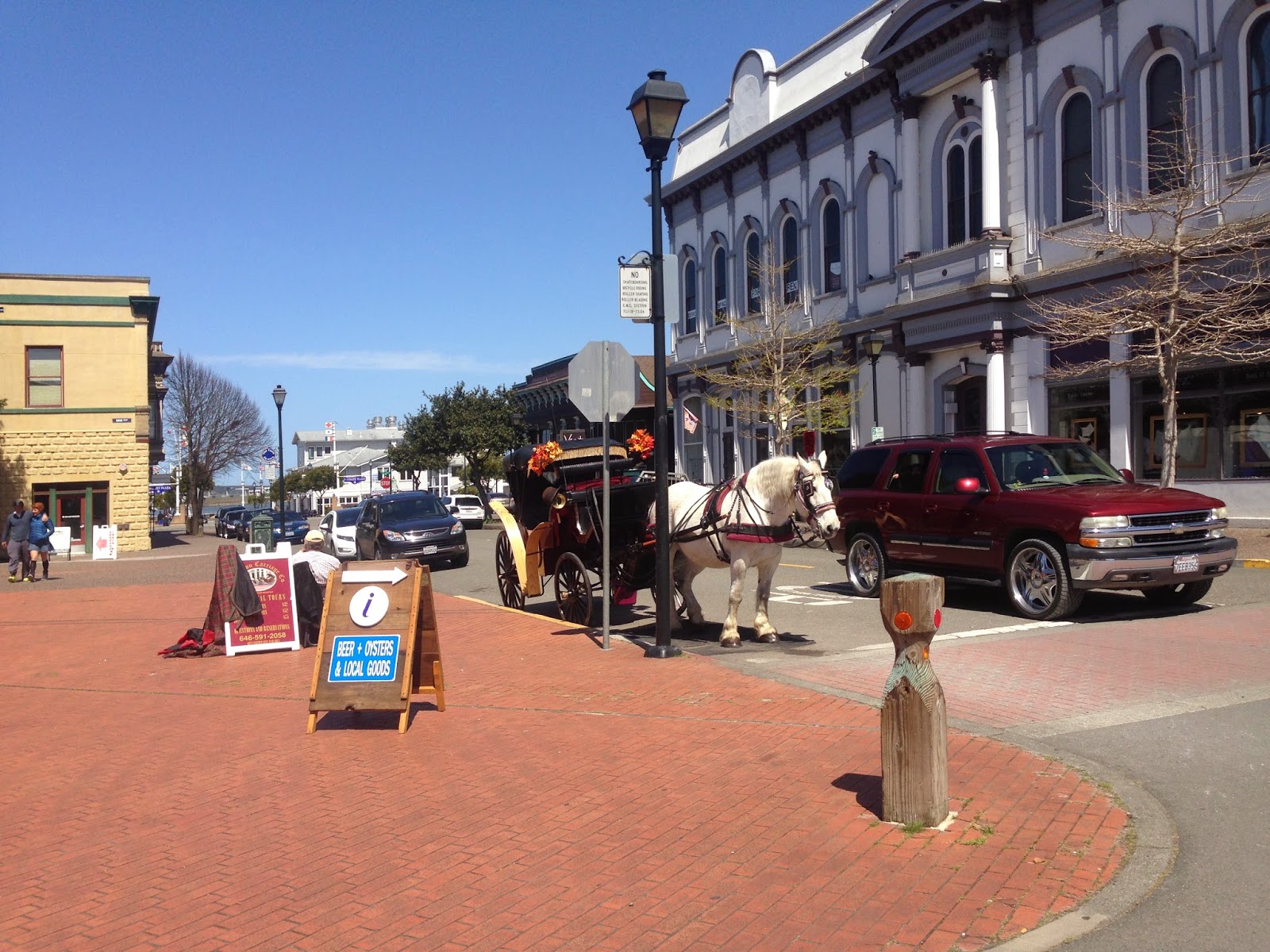 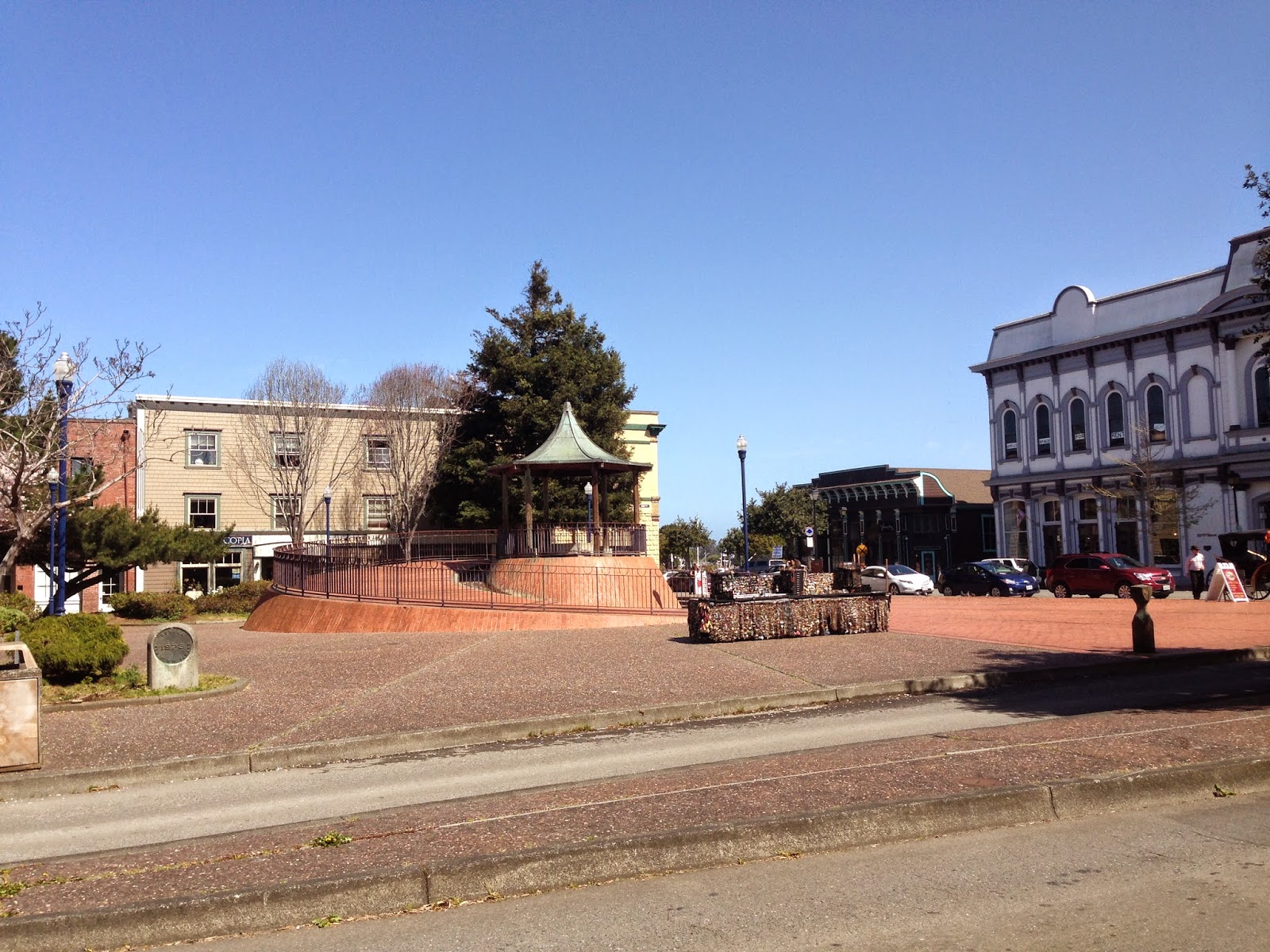 Weather does not look good for the next few days so hope to catch up on some boat maintenance and reading.  Today it rained for a few hours and cooled off to the low 50's.   Missing Mexico, shorts and sandy beaches but will continue the trek north.