After our very windy day at Neah Bay we left at daybreak intending to run to Newport Oregon.  Cape Flattery was rough but passable.  Wind was 20 kts and 6' swells along with 3' wind waves made for a long morning.   We ducked into Gray's Harbor in Westport Washington. 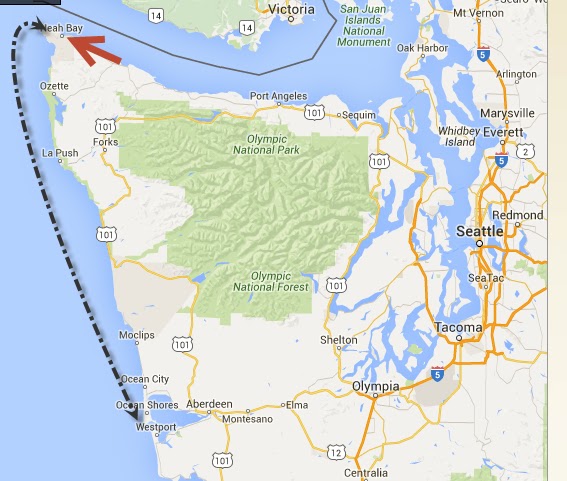 It was a long 16 hours with a late arrival at Gray's Harbor.  The bar at Gray's Harbor requires a long run and a very sharp turn before you are safely behind the breakwater.  Waves were breaking on both sides of us and the swell moved to the beam as we turned into the safe water.

Arriving late and after dark we tied to the fuel dock in this busy fishing harbor and went to sleep.  About 6 AM the harbor came to life as the fishing fleet started getting underway.  A very grumpy fuel dock manager woke us up to bet WORKNOT "off his xxxxing dock" and make room for boats buying fuel.  I asked how much fuel was and his first remark was $10/gal for yachts.....After some further discussion we agreed to buy 500 gallons for an amazing $1.81/gal.  Lowest price paid for diesel fuel ever by WORKNOT.   His attitude changed quickly when he realized we would spend some money.

Weather was not improving so we moved to slip for 3 days at the opposite end of the harbor.  Lots of seals and a long walk to the coffee shop. 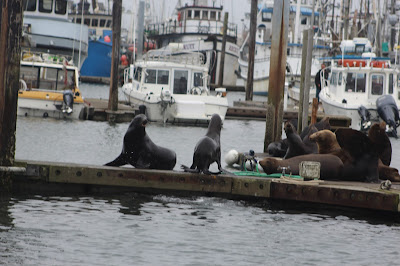 Check out this counter-top in the coffee shop- 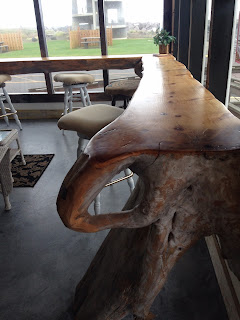 Original lighthouse is now a museum 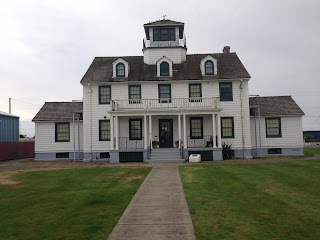 We took a bus into Aberdeen  and found a very humble town which may have seen better days years ago.  Plenty of closed up shops and empty buildings.  Picked up a few groceries and headed back to the boat.

Weather improved enough to leave on September 2 and our trip out of Gray's Harbor was similar to the trip in.  8-10' swells, breaking on both sides,even at slack water.  Swells continued to be large but well spaced and the timing got better as we got further offshore.  By noon the next day we decided to head for Coo's Bay.  Timing worked well for the bar and we cleared into Coo's bay a slack water around 3 PM.  32 hours run time.

After another 2 days of weather watching in Coo's Bay we left on September 6 at 4 PM planning on going to Crescent City CA.

Stained glass window in a Coo's Bay church near the marina.  New meaning to a steady hand on the tiller..... 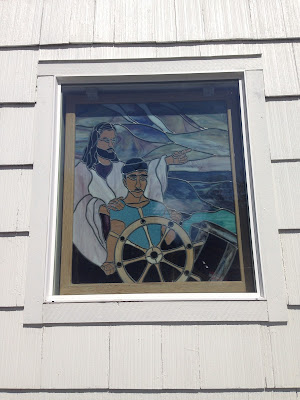 Crescent City was hit by a major tsunami in 1964.  The town was heavily damaged and the fishing fleet and harbor destroyed.  The recent 2011 tsunami did little damage to the battle hardened marina.
The pilings at Crescent City are the largest we saw in any small boat marina. 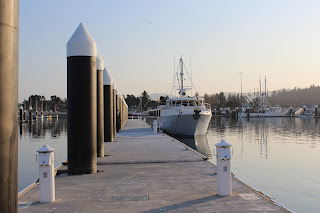 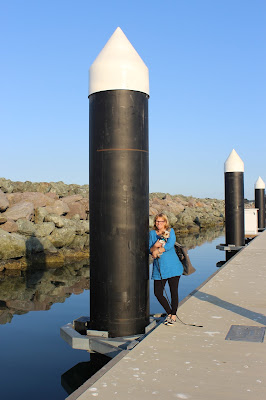 Further protecting the shoreline and harbor are 3520 Tetrapods weighing 25 tons each. 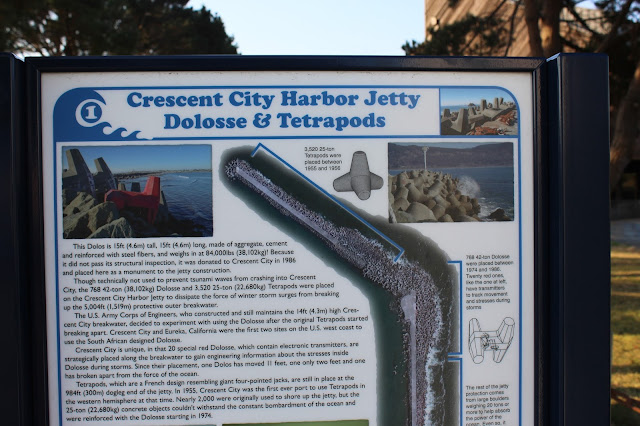 They are massive and interlock to form a formidable barrier to crashing waves. 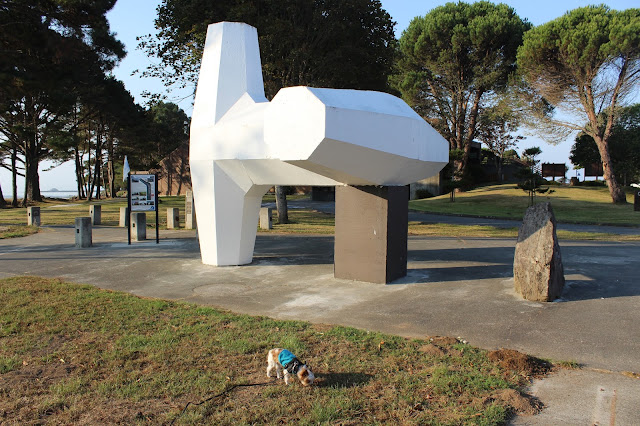 The tsunami museum is a few blocks from the harbor and worth the visit.

2 days of watching the weather and we left for San Francisco.  41 hour run to the Golden Gate in seas that improved from 8-9 ' swells at 10 seconds to 4' @ 12 seconds.   Easy cruising with some fog and confused seas at the points.  The further south the better the sea conditions.

The Golden Gate is always an impressive sight. 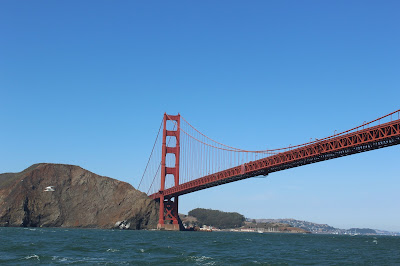 Posted by Unknown at 9:57 PM No comments:

Delayed reporting or hey WE have been busy........

Since out last blog update in August WORKNOT has traveled over 2,000 miles!  From Bellingham Washington, south to Ensenada Mexico, back North to San Diego and then joined the CUBAR 2015 for a trip to La Paz Mexico.  Today  11/20/15 finds us sitting in Los Cabos Mexico with 30+ other power boats enjoying a breezy but warm evening.   The next few blogs will attempt to capture the highlights of the past weeks.

How we got here is not much different than how we got to Glacier Bay Alaska but in reverse.   Average speed of 7.5 kts. with a fuel burn of 4.5 gal/hr overall.  Weather continues to dictate the movements of WORKNOT and its crew.   Most of the weather decisions we made were good, perhaps lucky is the more likely cause.  A few have been less than perfect.

After leaving Bellingham we headed for Neah Bay, just inside Strait of Juan De Fuca before you exit west to the Pacific Ocean.  This track took us across Canadian waters south of Victoria Canada for about 10 miles.  It was windy, some fog and cold but visibility was better than half mile and overcast.  On radar saw a vessel approaching at a fast (18-20kt) speed and headed directly to our course.  Soon the vessel below appeared from the fog complete with blue lights.  We came about, stopped and waited.  Note this is USCG vessel in Canadian waters.  The officer on deck was Canadian Coast Guard Officer.  He asked if I knew I was in Canadian waters and after acknowledging wanted to ask him if he knew he was on a USCG vessel in Canadian waters.   Soon it was explained they were operating a joint task force and would be boarding us.   Sea conditions were choppy and they were not going to allow me to go to a harbor.   The vessel pilot was USCG female officer and she did a masterful job of getting her crew (4 armed men) onboard without a single mark on WORKNOT. 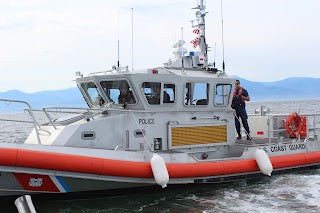 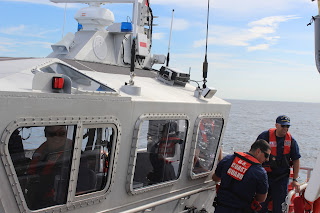 After going thru our paperwork, cruise log and a few questions they inspected our safety equipment and judged us seaworthy with no corrective action needed.  One of the officers unpacked our flare container and was determined to repack it as he found it.  We finally convinced him it was OK to leave it as it was and they returned to their vessel without incident.    It's a comfort to know we passed the inspection but it would be a lot less stressful if we could do it at the dock.

Neah Bay
Our preference is to be on anchor rather than a marina especially if we are only going to be there a day or so.  Neah Bay is primarily a commercial fishing harbor and the anchorage is very large and accessible.  Last time here we snagged an old crabpot on the anchor but choose to try it again.  The town was having a homecoming festival (Neah Bay Days) so we took the dinghy in to sample the local event. 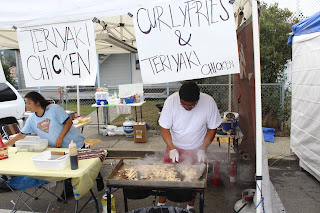 Lots of arts and craft folks and some amazingly large servings of food. 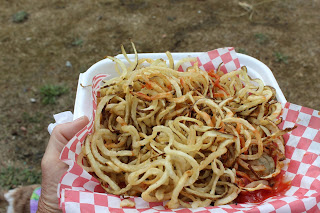 This was a single serving of curly fries.  Its a dinner sized container and I asked him to stop filling it up.  The seller estimates there are 3 potatoes in each serving but willing to add some if you are "extra hungry".


This wild ride was a major hit for the kids and few old folks as well.  It turned in every direction and is sure to cause motion sickness to even the most hearty sailor..... 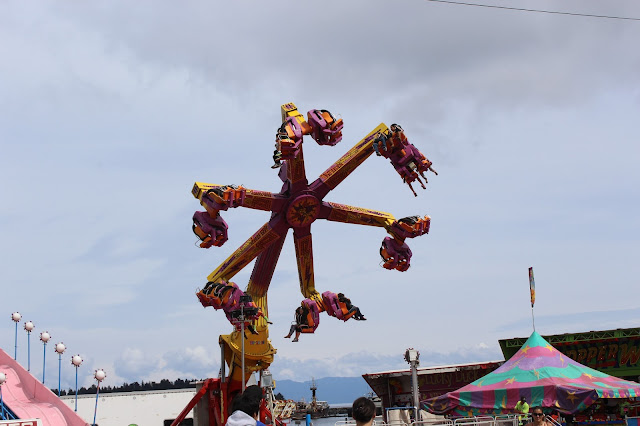 They had a very nice fireworks show but the real fireworks came the next morning. 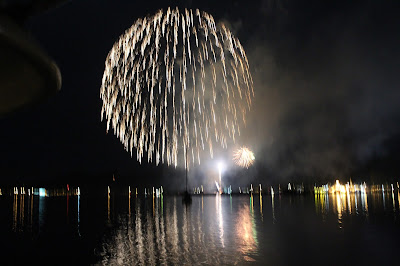 Sustained winds in the 40kt range with gusts over 50 knots for most of the daylight hours. 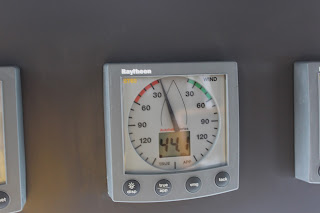 Wind was coming from the shore and the "fetch" for us to the shore was about 1/4 mile.  Still, white capping waves up to 4 feet pounded us.  The noise from this wind is incredible.  Different parts of the boat come alive as the wind builds from 30 kts and up.. Around 40 kts the support poles for my mast start to vibrate and hum.  Life lines and rails all have their own unique frequency of resonance and the whole boat seems alive.  Sleep is not an option. 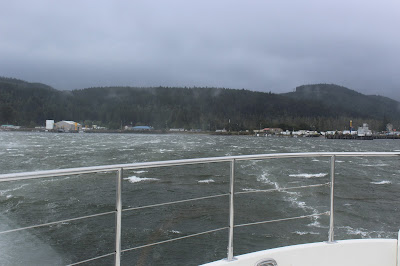 After several months in calm waters and gently breezes we were quickly reminded we were about to go back to open ocean and head over 1,000 miles of rocky unforgiving shore line with limited bailout harbors for the first 400 miles.

The wind storm settled later that day and we prepared to head out the next morning for our southbound trip.  Another confirmation the boat is much more durable than the crew....... 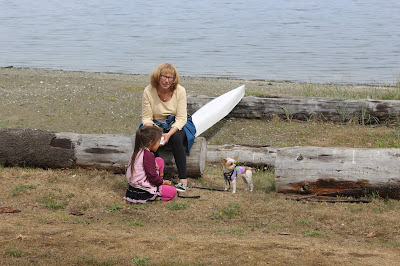