Along with trying to learn the new layout and systems aboard the “new to me boat” my friend DENNIS provided a great distraction with the “something I want to show you” item.   My buddy who was “done boating” took an interest in this. 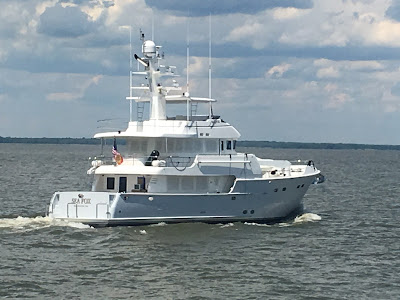 Two weeks later he owns a 76’ Nordhavn.   So much for “done boating”.  We were both aboard this boat in Mexico on the 2013 FUBAR Ralley.  Named Spring Day then it’s a whole other level of boating.   Yachting in my view.  It’s massive.   Weighing well over twice WORKNOT, powered by Detroit 60 Series and drawing over 7’.  Everything is bigger, lines, fenders, anchors, fuel tank (5,000 gallons) and operating expense.

Haulouts are ALWAYS stressful.   The entire vessel lifted from its natural habitat by 4 slings.   Less than 5% of the hull surface area supporting it all.   The minute or so when the boat is half over the water and half over the concrete edge as it’s wheeled to the blocking area.   Just writing about it gives me the creeps. 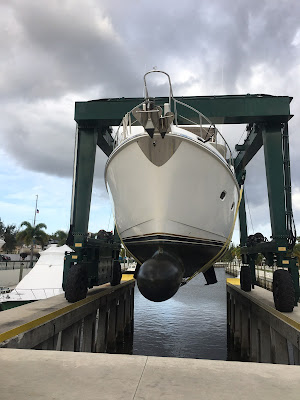 Usually when purchasing boats of this type a survey including out of the water inspection is done by a professional surveyor.   Many deals are broken by the disagreements between buyer and seller.   A good surveyor finds that balance between the parties and deals work out, some surveyors view their job as proving their worth by finding every defect possible.   A friend had a $1mm+ boat surveyed for purchase, included in the pages of notes was condemnation of the dinghy anchor light as it was a few inches short of the required height.  The light was the installed by the OEM boat builder when the dinghy was new 10 years ago.

WORKNOT was not surveyed when I purchased so this was the first time I saw it out of the water.   There is plenty to be “wrong” under water.   Fortunately no big surprises on this haulout. 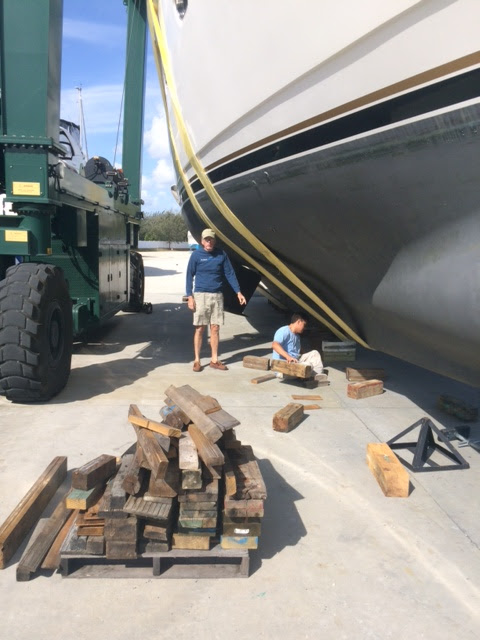 AND SO IT BEGINS, a “new to me” boat, same age and engine hours as the old one, from the same builder.   Today is the first voyage where I’m the Captain and she’s really ours.   Have been living aboard with the good friends Dennis and Julie on and off for past month as I shuttle between Mexico (suporting sale of N50) and Old Port Cove Florida preparing N57 to return to Mexico via Panama Canal.

Dennis is a vertern cruiser, owned more boats than I’ve owned cars and crossed most oceans.   More importantly Julie and he are good friends.   It was a little awkward buying a boat to live on and having the previous owner stay involved, let alone live aboard in the master suite.  However, true to his nature, DENNIS kept fixing things while I was gone.  Should have let them say longer.......

Take a look at the picture on the top of the blog, the water stream is used to washdown the anchor chain.  It’s from a large hydraulic driven pump that delivers several hundred gallons an hour of seawater.   Testing this in the dock at Old Port Cove almost got us evicted.   WORKNOT was clearly on the small range of boats at this West Palm resort and the big boys do NOT appreciate saltwater blown completely across the dock, across their power pedestal and half way up the side of their boat.

Getting a boat ready to cruise is all about mechanical prep and loading supplies including spares.  Dennis sold us the boat declaring “is my last boat” (keep that thought as it recurs often) and so all the onboard spares, tools and the contents of his 20yr+ storage locker came with the boat.  Just sorting out stainless hardware is a job. 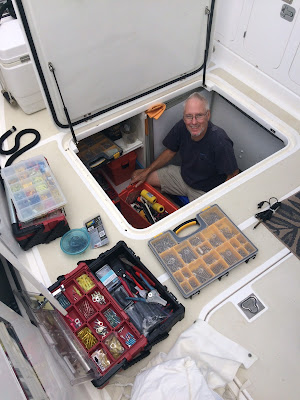 The journey to the boatyard was only a few hours but it included a lock and a few narrow bridges.   Great way to start the maiden voyage.  Reached River Forest boatyard without any major errors where I said goodbye to Julie and Dennis as they were leaving to go find a condo on the west coast of Florida.

Those of you who were following my blog know it has not been updated in almost a year.   While there are many excuses there are no reasons.   Mary, Keela and I are just as committed to cruising as before and have been actively traveling between Florida and Nova Scotia CANADA.

Since buying Nordhavn 5715 in February of 2017 we have logged 1155 engine hours.   Conservatively averaging 7 kts/hr yields 8,085 nautical miles.  5 gallons of fuel an hour average consumption equates to about 6,000 gallons.   My fuel logs indicate we purchased a bit less but WORKNOT had more than half of her 2,000 gallon capacity on board when purchased. (Thanks DENNIS)

Our original plan was to bring this boat back to Mexico and we were actually on the way just after purchase.   Fate interviened (more later) and we decided to cruise the east coast for a season.   Well this will be our second season here and still have not seen 20% of the available ports.

With over 1,000 hours on N57 WORKNOT I’m glad we took the risk and made the effort to get another cruising boat in order.  While it has been a major task, expense and had its moments of wondering “WHY DID I CHANGE BOATS?” It’s been a great improvement in comfort.

This is one of my favorite pictures of WORKNOT.  At anchor, at peace, sun rising on another day and ready for what comes next.   This one was taken in Nova Scotia last year. 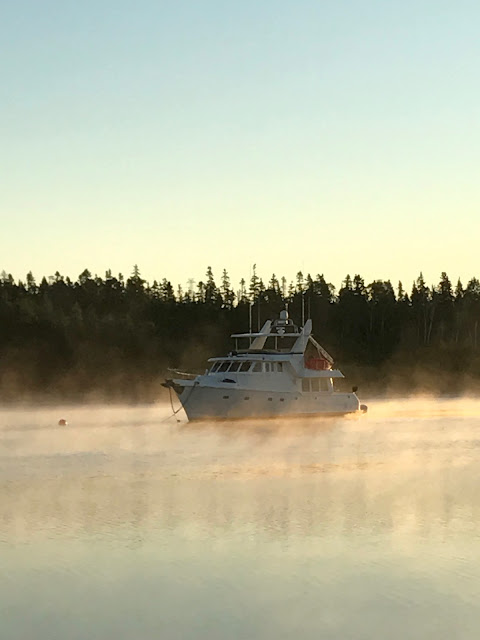 Over the next few weeks I’ll recap some of the highlights of our past seasons cruising and work to return to real time updates.  Tonight we are a little ahead of the southbound migration fleet here in Brunswick Landing Georgia.  For the Nordhavn crowd there are 2 other N57’s, N55 and N46 at the marina.